.
You choose which definition is closest to what Thai Royalism has become:
Monarchism

.
At a time of fear, when the military is effectively a member of the government coalition, and the new army chief is saying things like "everyone is obligated, in an act of loyalty, to root out certain individuals", it's worth remembering the past, and hope that lessons have been learnt.

We all know about Thaksin's popular "drug war", and the October 1973 and 1976 massacres, but less is known of the horrific efforts to suppress communist suspects in the south in the early 1970's:

Policy of government to "decisively flush out"
"merely followed orders" 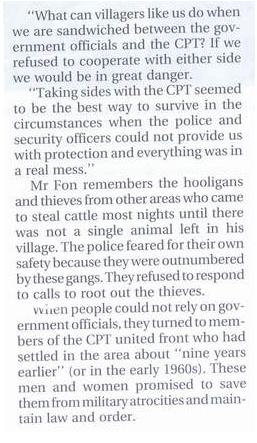 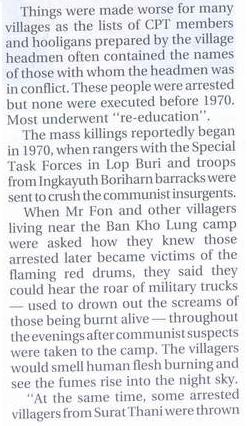 Arrested and most underwent "re-education" 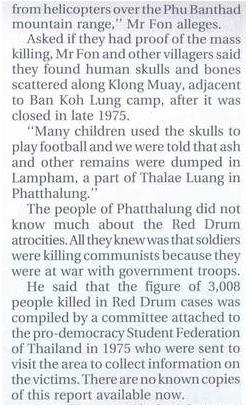 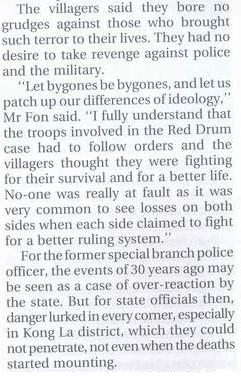 They bore no grudges.

"Each side claimed to fight for a better ruling system"


"Danger lurked in every corner" 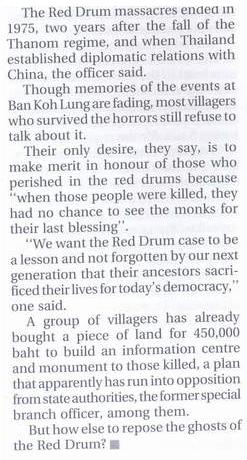 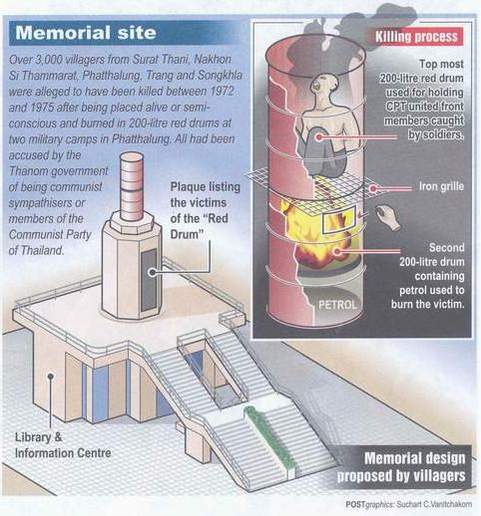 .
A nice blog here on some excellent proposals by a group of law professors at Thammasart University, led by Dr Worajet Pakirat.

Lets hope Thai politicians, and the Thai people get behind this very sensible (and much needed) proposal.

Dispelling the myth that yellow shirts only protested peacefully


I stumbled across the above video, which reminded me of my watching the final moments of the Redshirts protest on 19th May (with one eye on the PTV online broadcast, and the other eye on Twitter updates).

Unbelievably, we still see claims that the redshirt leaders were cowards and hid behind their followers (see comment #20 here for example).
Watch the video above, and also take note who suffered the vast majority of deaths and injury - surely that tells any rational observer which side was at most risk during the protest period, and also remember that the red leaders went on stage every day, even after Seh Daeng was so blatantly gunned down in the vicinity of foreign journalsist interviewing him.
What's really perverse is that those ridiculous cowardice claims most often come from staunch supporters of Abhisit, the PM who hid out at a military barracks for over a month, and from the types who were openly calling for a brutal crackdown.
(Note to students: It might be a good project for a thesis to trace some of those such comments on twitter - if anyone is so inclined, the Google 'updates' search function should be useful)

Looking back on the protest it becomes very clear that the redshirt leaders made two big mistakes:

Firstly they should have more clearly distanced themselves from the armed MIB. An overblown military with their fingers in every pie, is one of the major problems in Thailand, so while accepting help (or turning a blind eye to help) from one military faction against another might seem a good strategy for 'victory', that sort of victory would make them no better than the cabal they are trying to remove.

The second major mistake was that the leaders, and the followers, underestimated the double standard that they so often railed against. Having watched the antics of the yellow PAD have considerable success, with no punishment (even reward in the case of Foreign Minister Kasit), the reds foolishly thought all that was required to bring down a government was to maintain a protest long enough to force the government to call an election, or for a coalition partner to jump ship under the pressure.
What's clear now is that strategy only works if you are wearing the 'right' colour, and have the 'right' people backing you.


Here's a selection of tweets I extracted from the closing moments of the protest:


terryfrd: nattawud. Please listen to me,he tells protesting crowd. Today is one more time that we have had to make a difficult decision.

RichardBarrow: Nattawud telling the red shirt protesters at Rathchaprasong that they will surrender. Crowd disagrees.

terryfrd‎: We will have to wait for another chance. I declare we are ending the rally at this site, but not our struggle. Nattawud announces.

georgebkk‎: Nattawud: our fight will proceed according to democracy; I know you don't want to hear this but we cannot hold off the situation.

terryfrd: nattawud: This has not turned out the way we expected, but we have done our best. We will exchange our freedom for you.

sutatip_b‎: We have to wait for another chance. I declare we are ending the rally at this site, but not our struggle Nattawud announces

terryfrd: Nattawud: we have tried our best for the sake of the country, but when we see so much death, it has to stop. (Shouts of protest)

terryfrd‎: We are ending our rally here so that we can continue our struggle for democracy, nattawud says. I appeal to you, (explosions)

georgebkk: Nattawud: I know you can't accept, but we have assessed the situation thoroughly (Police entering area in force with shields)

RichardBarrow‎: Everyone jumpy as gunshots heard - Nattawud still talking but surrounded by team now - everyone jittery

terryfrd‎: Leaders on stage are very uneasy looking around.Nattawud abruptly ends his announcement.Comes back and says for crowd to go to Nat'l stadium

RichardBarrow‎: Nattawud making an announcement on the PA system that they are turning themselves in. Don't worry about us. It will be done by the law

(Hobby: Still underestimating the double standard, right till the end)

s_narut‎: Nattawud still asking protestors to go home from inside of police HQ

RichardBarrow‎: Nattawud: We chose to fight bravely. Thank you everyone.

terryfrd: Today is not our day, says nattawud. many have been killed and injured.After this is over, if you still have trust in us, ...

terryfrd‎: If you no longer have faith in our leadership, we will become ordinary red-shirt members, nattawud says.

terryfrd: Under SOE, the charges against us arean't all that serious, he says, so go home, nattawud tells upset supporters. Go Nat'l stadium

(Hobby: but those soldiers on the Skytrain line wont)

haroldrolloos‎: Leaders of the red shirts - Nattawud and Jattuporn - in #Bangkok are arrested, but the reds don't give up.

terryfrd‎: Nattawud, says that after the senators accepted role as mediators, govt closed the door and began crackdown.

I don't condone any of the violence that took place during the protest, or the burning afterwards, but I can certainly understand the anger and frustration of redshirts at how one colour has been so protected and encouraged, yet the redshirts end up being killed just for asking for an election (the main purpose of which was to try to undo an illegal military coup).

btw, for anyone who thinks the coup was legal and there was no choice but to endorse it, please see this and this.

This is probably just a one-off blog post, however comments are still welcome.
:)
Posted by hobby at 4:45 PM No comments:

.
My conclusion is that there is no hope of any real improvement until the LM laws are made toothless.

The LM laws are the glue that binds everything that keeps the status quo.

All debate on the systemic problems is stifled by the 15 year jail sentence hanging over the heads of anyone who steps too far in talking about (or even seeking) the truth - those that the brainwashing has not affected, then either play along to reap the rewards (vested interest) or opt for self censorship (understandable self interest).

The list of names in my previous blog shows what happens to those who push a little further.

It's a brilliant setup, the trap is now complete - after decades of one sided propaganda, no political party can touch on the subject of detoothing LM without committing political suicide.

Sorry to call a spade a spade, but there is no hope of any change until nature takes it's course, and even then I think there's a certain person who's reputation is such that the charade will be allowed to carry on for a few more decades until the next semi-divine character is groomed.

Jakrapob has seen how things work from the inside, and he tried to explain it in his talk at the the FCCT a few years ago, and also with his "a State within a State' article.


I just want to see the society be allowed to see all sides of the 'truth', have open and rational debate, fix the systemic problems that are stopping the country from moving on to a fairer, more just society, instead of the endless cycle of repression, protest, killing, coup etc continuously repeating like a broken record.

How can that happen when the LM law creates a climate of fear, and perpetuates the status quo?
.
Posted by hobby at 6:07 AM No comments:

Living in an Insane World